Kahaani 2 is thrilling – Yes but…

I knew I had to watch this one! Because it’s part of the Kahaani franchise and mysteries and thrillers tickles my brain very easily.

What the film is about?
The second version of Kahaani is a thriller involving a single-mother and her crippled daughter. They stay in a small apartment in Chandan Nagar, West Bengal and are waiting to move to New York for the younger one’s treatment. On one of their usual weekday mornings, Vidya Sinha (the mother) wakes up late and has to rush to office in Kolkata. She has to leave Mini (the daughter) alone for some time till the nurse arrives (she’s supposed to be at their home by 6 am). The day passes with Vidya coming home to find Mini kidnapped and a phone call asking her to come at a certain place to rescue her daughter. Vidya runs to save Mini only to be hit by a speeding kaali-peeli and landing up on an ICU bed and stay in coma for a few days.

Enter Inderjit Singh. The policeman who’s been eyeing a promotion and a job in Lalbazar, Kolkata and who works on what his gut-feeling says. Assigned with this case of road accident, he visits the hospital and the patient. The patient, he realizes, is Durga. Durga Rani Singh! From here on, unfolds the case of dual identity, a not-so-good past (child abuse) and the case of saving Mini. 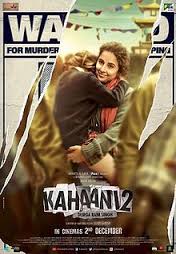 What is film is not about?
Kahaani 2 lets you uncover the mystery with the story. Hence, you start predicting the plots and the end. It is definitely not about the policeman and the leading lady. They have their own shares of romances knitted within the story.

While the story has its twists and turns, it is not about the missing husband whom we all were searching throughout the first version.

Kahaani 1 and 2 have these in common:


Why would I watch it again?
One, for the stellar performances of the actors. You know a character when you see the actor getting in its skin with perfection. In this case, Vidya Balan can only continue to be Vidya in all its installments. It will be difficult to imagine someone else playing Vidya, if not her. Arjun Rampal is the good looking eye candy inspector in the movie.

Two, for adding its name to the list of thrillers that Bollywood rarely produces.

This movie does give goose-bumps but occasionally. This is a good story but you will need to watch it after long intervals.

Email ThisBlogThis!Share to TwitterShare to FacebookShare to Pinterest
Labels: The Movie Maniac

Blast from the past!

As I sat down on that huge wide window pane after surviving that nightmare, I had only one thing to remember. “Believe in me and I will take care of the rest”, I had heard Him telling me last time.

I had forced myself to sleep that night. I was still trying to understand who could’ve sent me that letter. At an unexpected hour. After 16 long years. Should I open that letter? Should I wait for some more time before I open and read what is written inside?

It is only 10:30 pm. I have been trying to sleep from 9:30 pm after a few spoons of soup and half the bread. Although I stay alone and I survive the nightmares on my own, I felt I needed someone to feel not so scared. I had kept the envelope just next to me so that I could read it whenever I was ready. I didn’t have the courage to face another life altering truth again after having accepted what had happened last time.

We had stopped getting letters on his name once we announced his death. People reacted and all communications stopped afterwards. Then who sent this letter to him?

I opened and started reading…

I am writing to you with regards to the performance of your wife as a mother towards your daughter. Although we have discussed this several times in person, there has been no action taken from your side. This has prompted me to write a letter.

You wife, i.e. my mother, is an extremely nice woman. She wakes early in the morning, worships her God and starts cooking for us. She ensures that we all eat and go to school and office on time. But her entire persona changes the moment I come back home from school. Although she cooks some snacks for me, she is more interested in what I studied in school, my exam schedule and which chapters are still pending for me to study. I do not understand why can’t she keep my studies and my scores confidential and has to discuss the same with you every time there is a slight dip in my scores. None of my friends’ fathers are known to have a clue about their scores. Then, why should she involve you?

The matter is getting out of hand now and you need to talk to your wife about it. You will be kept informed about my exams and necessary details in the same manner you tell us about your performance ratings in office and your critical meetings with the boss.

I am hoping to hear from you soon.

Yours sincerely,
Your daughter

I stared at the letter for some more time. Was this really written to my husband by my daughter 16 years back? How did this letter get delivered now?

Next day morning, I called the post office and asked for the postman who delivered letters yesterday. When I told him about the letter, he said, “I found this letter while cleaning the old storage section. I saw the date and immediately understood that there might be some mystery. I enquired with our old post office managers and someone from them, happens to be your husband. Since there was no mention of the sender’s name, we decided to deliver the letter. Luckily, it was kept in a box, that’s why it looks all clean and new. Hope everything is ok, Madam?”

This story was published in Readomania.

Yesterday was July 8, 2015. The day before, July 7, 2015. Birthdays of two Indian cricket team captains. No, I didn’t celebrate by cutting cakes but have spent time reading almost every article that spoke about their achievements and why are they the best captains Indian ever had?

While reading these new articles and the match statistics, I was quick enough to have memory flashes about few of the matches that I guess I will never forget and the excitement that I lived through those hours. I never attempted to write about my liking for the sport or the players, but this time, I guess I will.

There’s always some kind of craziness and sheer patriotic feeling that comes up whenever there’s an India-Pakistan match, especially during the ICC Cricket World Cups. The fact that Pakistan has never won a match against India makes it even more challenging with every World Cup that takes place.

World Cup 1992
I must be about seven years old and know only a couple of names in cricket. To be precise, Sachin Tendulkar, Imran Khan, Wasim Akram and some others. All credits to the cricket crazy family. All I remember was that I was asked to finish my studies so that I can sit with them and watch the match, and rejoice when India wins. That I didn’t understand the game didn’t matter because I knew which was Out, a Six and a Four. I might’ve missed out on the technicalities of the match but enjoyed it thoroughly on our black & white TV.

World Cup 1996
This one is being played in the Indian sub-continent and the expectations from India is sky-high. I knew all the players, thanks to playing book cricket with my cousin throughout these years, and was prepared for the match. I finished my studies, prepared for the tests and watched the match, this time on our Philips colour TV.

PS: For this match, superstitions of all kinds were on the highest level. I was even made to sneeze to make fall of quick wickets happen.

World Cup 2003
This one was special. Sourav Ganguly was the captain and the match was being played at a time when India was already on a winning spree. We wanted to win at any cost and we won. Sachin Tendulkar played with an injury and scored 98. The bowlers were fantastic. And since I was on the verge of completing my school years, I only needed to complete my projects and studies and convince my Mom that I wouldn’t be wasting my time. I even remember stepping out of the house and praying at a local temple for India’s win!

World Cup 2011
India would qualify for the finals if we win against Pakistan in this high-voltage semi-final match. This was the first time I realised how difficult it is to tell a convincing lie to your boss so that you return home early and get to watch the match. We were given strict instructions that we have to complete the designated 9 hours and then only go home. And this was the time I wished how the Taxi should have a tiny TV or I should have one so that I do not miss out on any of the actions. I reached, watched and rejoiced the win, with a secret desire that I get a phone with a TV in it!

World Cup 2015
This was the first match India would be playing in this series and its against Pakistan. I was returning from Kolkata to Bangalore and it was killing me that I was missing out watching the live match. Yes, this time though I had a smartphone with me, I didn’t have the app that streamed the live match. I bugged the cab driver so much that he made sure I reach home as early as possible. Well, I chose to hang out at my friend’s place so that we can watch the match together and rejoice the winning spree.

Things have changed drastically from the 1992 world cup to the recent one. It’s now convenient enough to access live information in your phone and be updated. But not all browsers help you watch and enjoy these moments. UC browser (http://www.ucweb.com/) has been successful in getting this problem solved. With UC Cricket, you can watch live matches irrespective of the place you are in. So, now, I do not need to lie to my boss, instead complete my work hours as we both watch the match at our convenience! ;)

Proud to be an IndiBlogger

Find me in Bloglovin'